I am wondering if anyone on here has ever ordered from a company called Katwallks before? They are out of Oklahoma. I put an order in back in early July. Their site says to wait 6-8 weeks (or less) before you get your order. Well, I still have not gotten a thing! Their customer service sucks, I've written emails to them and never got replies. I finally called them today to see what was going on just to find out that they hadn't even started making my order yet! I talked to the same guy as back in July. He tried telling me different reasons/excuses why he couldn't/didn't fill the order. I asked him how much longer I would have to wait and he said a couple more weeks. I am having a hard time believing that. I told him that it would have been nice to hear back from him, and let me know what is going on. I talked to someone else about this and they said they think that he is stalling. I don't want to be "had." I spent a lot of money on this stuff for my cat room!

I had done my research on catwalks for a couple of years and this company always stuck out at me and seemed to be the best, with great reviews and photos from customers too. So I didn't go in on this blindsided. No pun intended since tomorrow is Halloween," but I am starting to feel like I have been "tricked." I am NOT happy.

Has anyone else ordered from them before? I would like to hear others' experiences.
Last edited by a moderator: Nov 2, 2010
T

Can you maybe try and get your money back? I am not sure what you can do but there has to be away to get your cash back or something. Let us know how it turns out.

*Sigh* I don't know. And the guy (whom I'm guessing runs the business) is not very professional on the phone. He's just not professional period. I thought about asking for my money back. I had such big plans for the things I ordered though. I even had a muralist come out to totally re-do the look of the cat room and what I had him paint goes with this cat furniture that I ordered from KatWallks. I mean, the murals stand on their own and would look fine without the furniture on the walls... but then there goes my vision I created for the room, which I thought was really neat. Maybe I should start looking to see if anyone else can make the same kind of items.

I say you go get some 2X4's, L brackets, carpet and carpet glue and make your own!

Inferno12 said:
I say you go get some 2X4's, L brackets, carpet and carpet glue and make your own!
Click to expand...

Not sure how much you were investing in the cat room, Angelsphynx.. But I have ordered furniture from this company before and have been very pleased. I ordered a tree/condo... but I am posting the link to their wall accessories...

Never heard of that other company... But if you payed with a CC, you can call and dispute the charges and have them reversed since you have waited a reasonable amount of time.

Inferno12 said:
I say you go get some 2X4's, L brackets, carpet and carpet glue and make your own!
Click to expand...

My mom said the same thing!

Gizzymom said:
I wish I was as handy as you, Dawn!!!

Not sure how much you were investing in the cat room, Angelsphynx.. But I have ordered furniture from this company before and have been very pleased. I ordered a tree/condo... but I am posting the link to their wall accessories...

Never heard of that other company... But if you payed with a CC, you can call and dispute the charges and have them reversed since you have waited a reasonable amount of time.

I would love to see this other company you speak of! I don't see a link though.

AngelSphynx said:
I would love to see this other company you speak of! I don't see a link though.
Click to expand...

Oh I think it was taken off my ilovemysphynx. I guess you are not allowed to post links?
Can you PM it to me? I've posted links before... hmm...

Well, I had called him again (don't remember when it was.) I dunno... he was mumbling and saying all sorts of things as to why he hadn't/couldn't send the stuff before now, but he promised to at least send part of my order in two weeks. So 2 weeks came and left...then 3 weeks...and 4... got nothing, heard nothing.

He didn't respond to the email until 4 or 5 days later. I was surprised he wrote and I almost sent those forms out. I didn't send them cause I wanted to add to it about how I contacted him one more time through email with no response. So lucky him! He said he would ship my order "this week," which was near the end of November at that time. I asked him if I would get a tracking number so I know if my items will be shipped.(You know, cause obviously he doesn't go through with what he says.) He said yes and I was relieved when I finally got the tracking number from UPS., although it wasn't shipped "this week", more like "December 7." But, at least it is being shipped and the email from UPS says I will get my packages on Dec. 10, which is tomorrow.

So, I hope I will be very happy when it all comes., especially with all I have been through with this company. I was starting to think I got scammed! ! In the beginning I even told him that I wanted to buy more in the near future but that will NOT be happening now. I am NEVER going back. I will just make them myself. Well, my bro--in-law will. lol.

Oh keep us informed. Hopefully it is everything you hoped for. If not you should get your money back! We want to see pics.
N

That's too bad you had all this trouble with this company/guy, I definitely wouldn't do business with him again, which is sad cuz he has really neat stuff. However, it sounds like your bro-in law can help you out with that, so that is good. I hope you get your entire order from this jerk though. Keep us updated and I wanna see pics of your new cat room!

I hope your order is perfect and that it turns out to be worth all the hassels you went through.

Im so glad it worked out for you! Cant wait to see pics!

I would still send the complaint to the PayPal people! Can't wait to see the cat room when you get it together, maybe the kitties should have a play date

I did get everything exactly as the email said and I have to say, the Katwallks company makes some quality stuff! Very nice! I am very impressed, I just wish their customer service was better.

But I am happy. Got a great, top notch product. And I have it all up already! Whoo hoo!! It looks great and the cats LOOOVE it!!

Here are a couple pics! I will post more in an album under my profile soon. I made it so it looks like the kitties are climbing the tree. And the perch on the trunk of the tree I call the "tree house." 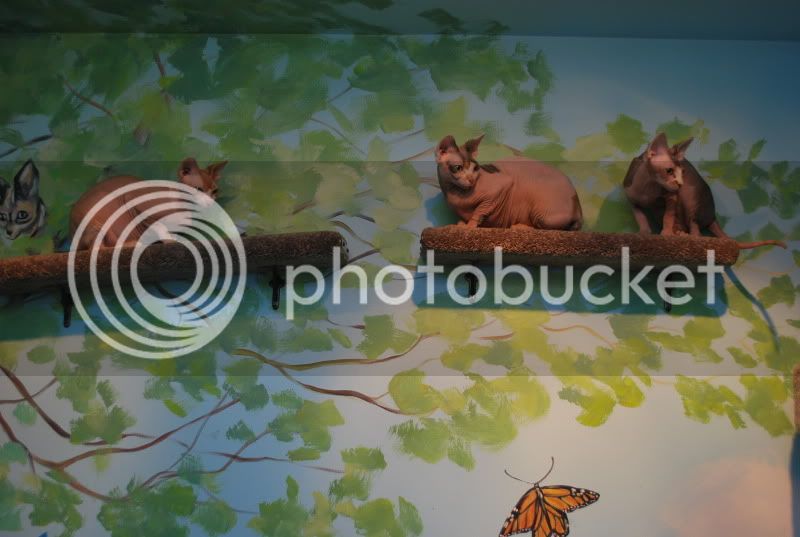 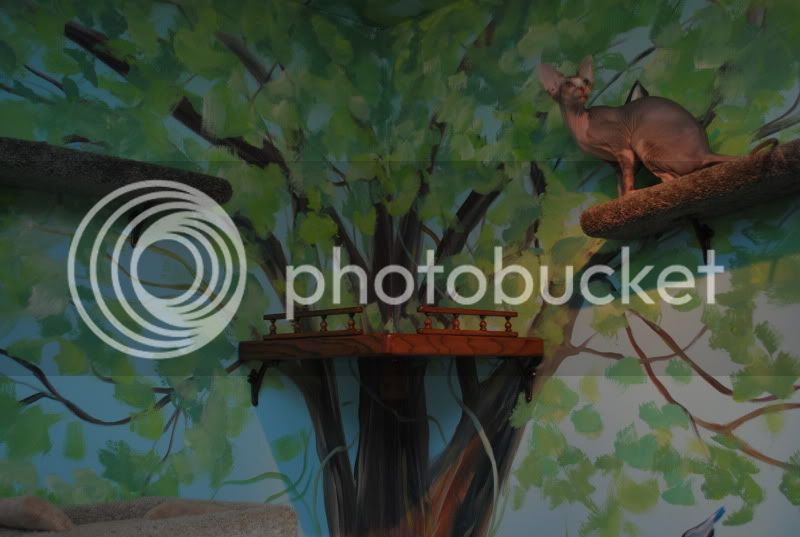 emmysmom10 said:
I would still send the complaint to the PayPal people! Can't wait to see the cat room when you get it together, maybe the kitties should have a play date

That would be AWESOME!!!

Very cool!!! Did you do the painting yourself?? It is like kitty paradise!!!

Wow looks great like the trees. They look happy that is for sure.

What a story! You are far more patient than I am-- I'm a believer in customer service. I compliment when people do an outstanding job and of course complain when necessary.

Your kitty room is so cute~