Looking for a sphynx in Chicago

Status
Not open for further replies.

I want to adopt another sphynx. I currently have a boy, 4yo. He needs a friend. Looking for a kitten or an adult cat. Can anyone recommend breeders in Chicago? 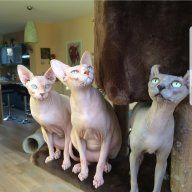 Good luck on your search. Hope members from your area chime in. 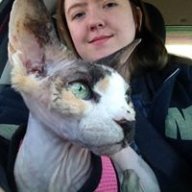 @malvina05 ,please PM me for the breeder info link

my second and third babies came from here. She is about an hour north of Chicago, and my girl from her was my first love. She lived until she was 13 and was healthy throughout. Kristin is the breeders name and while it has been quite a few years since I've gotten a kitten from her, the girl I had (My profile pic baby) was just perfect in every way. From what I remember, she was very caring, very invested in her cats and a good breeder. The only reason I haven't gotten more kittens from her is she didn't have any available at the time when I was looking. I had needed one pretty quickly due to loosing my old girl at 13 and I didn't want my boy kitten to grow up alone. He was only around 8 months at the time and I didn't want him to become territorial. If you look in the Indiana area, I can recommend you avoid certain catterys where I've gotten sick kittens from.

PM me for name of breeder to avoid where I got my current boy from. They love their cats very much but aren't educated on the breed or cats in general. Shazam came to me at 4 and a half months, he was delayed two weeks because he had the "sniffles" which turned into a full blown upper respiratory infection that took two months and hundreds of dollars to fight. I found out later that he has feline herpes, and has likely had it since he was a kitten. Most cats from catteries will have exposure to it, but most wont have as severe a reaction as my boy has, but the reaction can be genetic. THis isn't really the breeders fault, but I caution simply because when Shazam was a kitten and was very sick, we were told by the breeder that the vet's medications were a waste of time and to give him children's cough and cold medication instead of taking him to the vet, something which is incredibly toxic to them. Shazam will be sick his entire life, and has had to have surgery already on his eye, and will have eye infections and respiratory infections recurring. I would also avoid Jsphynx. I got two kittens from her and both died very early. this cattery is located on the border of indiana and kentucky. My first girl died at 2 and a half from serious IBD and my second from FIP at only 8 months. broke my heart, and all she could say to me was that it had to be something I did because she has no disease in her cattery.
I am not here to slander either cattery because i'm sure both love their cats very much, but I am just sharing my experience in a non threatening way.
If you do not find anything in the chicago area or Kristin doesn't have any cats available in a time frame you want, I know another breeder in southern illinois, where I got my Rora from. Rora is only a year and a half, and Janet is very new to breeding, but she is really motivated to learn about her cats, loves them dearly, and has kept in contact with me about my girl. I don't know if she has any kittens currently, but if you would like her contact info private message me and i'll send it that way, dont want to post her phone number publicly lol.
best of luck! I hope you find the purrfect wrinkle baby.
Last edited by a moderator: Apr 7, 2018 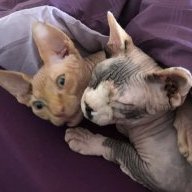 @malvina05 wishing you luck in your search.

Status
Not open for further replies.