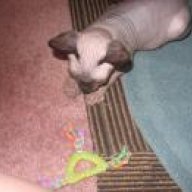 We have been so busy on the house stuff I haven't been on Sphynxlair that much lately. Was missing you guys! O.k. here's my story:
A couple days ago after Shawn and I arrived home from school/teaching, we let George out of his cage.(He hurt himself recently and the vet recommended it while we were gone) I was sitting on the bed watching television and Shawn was on the computer when we noticed that George had disappeared for awhile. When he came back, and jumped on Shawn's lap Shawn noticed that George's feet and tail were soaked. Shawn thought that George had knocked over his bowl and gotten water on himself. I, of course, knew better. I walked into the bathroom where I found water on the floor and kitty footprints ALL over the toilet seat! George had apparently been swimming/playing in the toilet! Ugh! Looks like we will be keeping the toilet lid closed from now on!

Definately safer to keep the lid down. He could drown or drink the water which wouldn't be good. 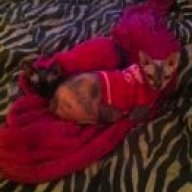 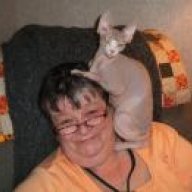 George sounds like a pistol! Gotta love him though! 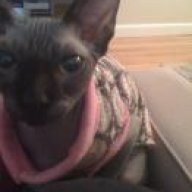 I'm so afraid of Sophie getting in the toilet! I always close the lid but other's don't!

I couldn't find her once and started to panic thinking some how she had gotten in there and it closed.

good plan! fortunately he didn't go to the litterbox after his swim. the only thing worse than toilet feet is cement litter boots on a wet kitty!

CoolSphynx said:
good plan! fortunately he didn't go to the litterbox after his swim. the only thing worse than toilet feet is cement litter boots on a wet kitty!
Click to expand... 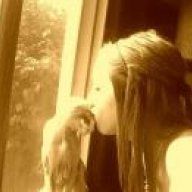 Poor George, I always worry about that but there is no keeping the lid down in this house

and so far we have been lucky no swimming kitty! 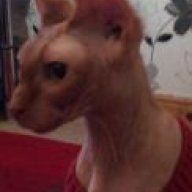 Ha ha! Sounds like my bengal kitten, she is fascinated by water, she gets in the bath, basin, sink, toilet! I have to watch her too! 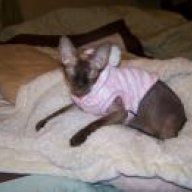